Swaminarayan temple is enjoying popularity and considered as a top destination for the silvassa tourism.

Research of many temple  by the experts indicates that science of Vastu is equally applicable to the temple and different shrines. Successful devotional place can be created with the help of Vastu power. Our study and survey has confirmed that such devotion places  enjoys popularity when Vastu is followed during the planning and execution stage. Swaminarayan temple build on the bank of Damanganga river, silvassa is one of the living example of natural Vastu. Positive Vastu features has made this place aesthetically very attractive. It has power to bring huge prosperity. Here prosperity in broad sense includes peace, popularity, health and wealth. When Vastu rules are followed knowingly or unknowingly, success follows automatically. Such premises has a huge potential to attract more devotees, tourist and new people. Swaminarayan temple is one of the top attraction out  of 10 major destination in Silvassa.  It’s a religious and sacred temple  with beautiful architecture. Lakhs of devotees and tourists visit the Swaminarayan temple every year. Temple is most famous attraction to silvassa tourist.   It’s a large complex consisting of main temple, guest house, library, divine shop, canteen, Satsang hall, guest house and a Sant Niwas. People can enjoy scenic beauty of the temple and its surrounding. It has a many favorable features of Vastu.

This is a south west quadrant site with lots of open space in the North East. The entire complex as a topographical advantage. Such site has a  capacity to pull large numbers of devotees to the temple. Administration area  for the temple authorities and main temple are located in the  south west zone. This is a good feature as per Vastu. 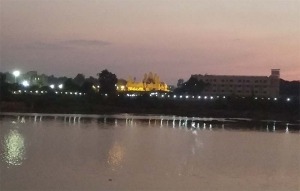 Site with the river flowing from the south to north in the eastern zone is considered as a first grade site. Such location are found to be very peaceful and serene. A water body in the north east brings peace. People experiences tranquil feeling. A water in the north east zone improves the social connections with the devotees and attract more of them. It acts like a magnet. Furthermore, there is a huge nakshatra garden and river front towards the east. This adds  Vastu strength of the place.

Open space in the north east block is believed to bless people with royal pleasure and strong spiritual vibrations. According to Vastu, open space in the north-east is called a breathing space which increases the popularity of the place. The open space is more exposed to sunlight in the large extent. This makes it highly blissful place. This divine place has a huge attraction due to its fine architecture. The energy here is amazing. There will be increase in number of devotees as well as visitors year after year. As per our research and the experience of may other Vastu experts, open space in the north east has a healing vibrations. Sick people feel more comfortable and cured at such place. People suffering for frequent illness should visit such place. Site has a slope towards the east, which promotes the harmony   and brightens the image of the sacred place. It  makes place more famous in the entire region. Lower level at east is always considered auspicious. This will bring name and fame to the temple resulting in to inflow of new visitors. It has enoromous potential to become a top tourist destination.  Elevated west higher than the east is bound to ensure uninterrupted success.

This temple has a Lord swaminaraya idol on the west. Even most famous temples has a same arrangements. When devotee faces west the deity faces east, there is more open space in the east available in the front. Hence open space in the east zone supports Vastu requirements. This arrangement should not be considered when arranging temple in the home or offices. It showers beautiful blessings on the devotees and visitors. Big entrance towards the East is called a door of glory. Lord invites people  of all sorts to draw close to him in during the prayer through auspicious door.

Five key elements of Vastu generates beneficial energy individually as well as collectively.  They are nature’s five angels of positivity, prosperity and peace.

Following five natural elements of Vastu performs a miracles at such location:-

Presence of above  strong five elements  creates long lasting positive image for the holy place. These natural forces are well channelized in the Vastu planning of the temple complex.  Also they will prove to be major partners in the success of this divine location.

Vastu gives lots of importance to the entrances. Vastu is all about the energy and vibrations.  A main entrance of the complex falls in the south zone of the entire plot. It may impact of the delay in implementation of decisions taken by the administration.  Due to this prosperity and income of the temple may suffer. Anyways, multiple strong features of this holy places are nullifying the bad placement of front entrance.

We believe that temple  will enjoy never ending popularity and patronage all over the world.